After 48 hours of passionate debate, the House of Representatives in Florida passed legislation in May 2019 that would allow classroom teachers to carry firearms in schools. The bill was approved by the Senate already, and at the time of writing, Republican Governor Ron DeSantis expects to sign the bill when it reaches his desk.

This law follows an effort from the year before that created guardian programs in the state, allowing districts to arm school staff as a way to protect students. Before this new bill, classroom teachers were not allowed to carry, so this legislation removes the exception. Then each school district will have the opportunity to decide whether they want to have their teachers armed while on campus.

Most Florida schools have already said that they will not give this permission, even when the legislation becomes active. Only 25 out of the 67 school districts have approved guardian programs since 2018, with most being in rural areas.

Should instructors be permitted to carry a gun to school with them in this era of school shootings and mass casualties? These are the pros and cons of arming teachers to consider.

1. It gives a classroom a fighting chance during a lockdown situation.
If a teacher has a classroom of 20 students who are trapped with an active shooter at their door, the presence of a firearm can help to save lives. Even the knowledge that a teacher might be armed could be enough to stop an uncertain individual from committing an act of violence. If our teachers are trained in the appropriate use of a firearm, then they can take the shot before police officers arrive to contain the situation. Even in a best-case scenario, it may be 2-4 minutes before the first officials arrive at the school to confront a shooter. A teacher could react much faster.

“We’re 20 minutes from any police force being able to respond to an event,” said Ryan Burns, Superintendent of the Northwestern Area School District in South Dakota, to local affiliate KPRY, “so with that in mind is one of the reasons why we decided to move forward.”

2. Arming teachers would bolster school security.
Our schools are not as strong as they need to be from a security standpoint with the emphasis on gun violence that we see each year. Having a police officer on campus is helpful, especially with an active shooter, but a handful of armed people cannot be in every room at school all of the time. After the incident at Parkland, we can also see that our SROs may not be overly reliable either. Having willfully armed teachers in the classroom as part of a crisis response team can heighten security during the day to ensure our kids have a safe place to learn.

3. School districts can save a lot of money by arming teachers.
After the events of the Sandy Hook school shooting which took the lives of 20 first graders and eight staff, the Clarksville School District wanted to hire an extra full-time security guard, but they couldn’t afford it. The cost of one new armed staffer is about $50,000 per year in the United States, but this Arkansas district found that they could train 13 staff for $68,000. They took the latter approach using volunteers and have found that the program is an excellent deterrent.

As Jim Krohn, a social studies teacher for the school district, told local affiliate KTFA, “If we didn’t do this and somebody came into this building or any of our school buildings and harmed children, it would be hard to go to sleep that night thinking what else could I have done, and at least we’ve done what we think is the best thing to protect the children of Clarksville School District.”

4. Parents can still have the final say in most school districts.
If parents don’t like the idea of having armed teachers in the classroom or on campus, then most jurisdictions allow families to work toward putting the issue to a voter referendum. That means if there is a disagreement with a school board decision, then there is a way to override this issue. Before carrying a firearm, most schools require at least 80 hours of training in the use of force, evidence of weapon proficiency, first aid certification, and an overview of legality concerns before going before the school board for approval.

6. Most shooters kill themselves when confronted by an armed defender.
Another benefit to consider with the arming of teachers is the fact that active shooters often take their own lives once an armed person confronts their behavior. It is one of the most effective ways to stop an active shooter incident at a school. Not all shooters do this, but the difference between an armed response that is 30 seconds in the making compared to one that is five minutes can save dozens of lives. Since one person is shot on average every 17 seconds in the United States, there are good odds that every child will experience an authentic lockdown incident at least once during their educational career.

7. It doesn’t need to be an all-in or nothing proposition.
We can advocate for the need to have armed teachers who are correctly trained in the use of their firearm while still wanting to have laws in place which keep guns out of the hands of people who should have them in the first place. Our area of focus should include additional programs that can help to ease community issues which could lead to school shootings in the first place, such as mental healthcare initiatives, crime reduction efforts, and anti-bullying campaigns.

1. The presence of a gun raises the likelihood of its usage.
The events of Columbine over two decades ago are usually treated as the start of the school shooting era in the United States. There are far too many acts of gun violence that happen in American society already. Multiple studies show that when there is a firearm present anywhere, even in the home, then it is more likely to be used as a weapon. One-third of gun deaths are homicides, which is a rate that is 25 times higher than that of any other high-income country. Women are 21 times more likely to be killed with a gun in the U.S. than in any other nation.

Bring a firearm into the classroom, even in the hands of a trained user, means that this tool is more likely to be used simply because of its presence. Could this be an advantage if it stops a shooter? Of course, it is. This tool could also be used to harm others.

2. It provides a school shooter with more ammunition.
The reality of having a gun in every classroom is that it increases the risk of a school shooting rampage to last longer than it should. Shooters would target teachers first because of the knowledge that there could be a firearm in the classroom. Then they could eliminate the class, take the extra gun, and continue that pattern throughout the school until they decide to stop, or law enforcement intervenes.

Between 2008-2017, The Trace discovered that almost 1,800 guns were reported lost or stolen by law enforcement in the United States, including four fully-automatic submachine guns. Officers are assaulted with the weapons they carry in the U.S. each year. If this issue happens to the police already, then it will also occur with armed teachers.

3. Teachers could target their students in the classroom.
Research by Gifford’s has found that there have been at least 65 different publicly-reported incidents of guns being mishandled at school since 2014. These issues include a loaded gun falling from the waistband of a teacher that the individual was performing a cartwheel, a student grabbing at a gun while being subdued, and a teacher accidentally firing a gun during a safety demonstration.

The most common problem we see in schools that allow guns on campus is that staff forget them in the bathroom. Over a dozen incidents of teachers or security personnel leaving their weapon in the restroom are documented. Even off-duty police officers and school resource officials have experienced this issue.

4. It creates a situation where teachers could be forced to carry a gun.
Even those who support the idea of arming teachers say that any thought of forcing an individual to carry a gun should be off of the table. It should be a decision that each person can make as an American citizen instead of it being an obligation for them dictated by the government. When a small group of staff carry concealed firearms and receive the correct training to use the weapon, then students often say that they feel protected.

When the idea of forcing teachers to have guns receives discussions, then students say that they feel less safe. Our goal with this idea must be to make it voluntary instead of mandatory if it ever has a hope to work.

5. Teachers are responsible for the cost and training of their firearm.
Even if we set aside the threat of harm from the concept of arming teachers, this legislation encourages these educators to spend more on what is usually a limited salary. The money spent on a firearm is funds that won’t be spent on books or supplies. Handguns aren’t cheap, and ammunition isn’t free. Advocates would say that having textbooks is pointless if no one is alive to read them, but our response to the threat of a school shooting is what defines who we are culturally. If our priority is for a weapon first and an education second, then the next generation of children will have that as their learning foundation.

6. It places the school and the teacher into a position of liability.
One of the primary disadvantages of arming teachers is the fact that a gun changes the rules of liability on campus. Once you have educators with firearms in the classroom, then the liability of an incident falls onto the teacher and the school. We already have districts acting in the place of parents during the school day. This level of responsibility really asks them to do more than they should to protect their children.

3 out of 5 teachers already say that they are stressed out, rating their mental health as being “not good.” Giving that person a gun to use in a triggering situation causes problems. Even one teacher snapping is a risk we shouldn’t take.

7. Teachers would be placing their lives at risk from multiple sources.
Armed teachers might help to save lives, but the action of carrying a gun could place them at risk for harm from multiple sources. There are trained and professional police officers over the years who have incorrectly identified innocent people carrying a firearm as their perpetrator, with some even firing on the individual.

On Veteran’s Day 2018, Jemel Roberson was working as a security guard at a bar in the Chicago suburb of Robbins. Roberson was armed with a license to carry. He apprehended a gunman while on the job, had clothing on which identified him, and an officer still shot him despite witnesses shouting at them that he was protecting them. Arming teachers could create similar incidents.

The pros and cons of armed teachers in the classroom are one of many ideas that we can consider to help protect our current and future children from violence in what is supposed to be a safe place. It is imperative that we remember that whether you are for or against this idea, our goal is still the same. There is too much at risk to make this issue a political one. Lives are at stake, and we must come up with a solution that works. 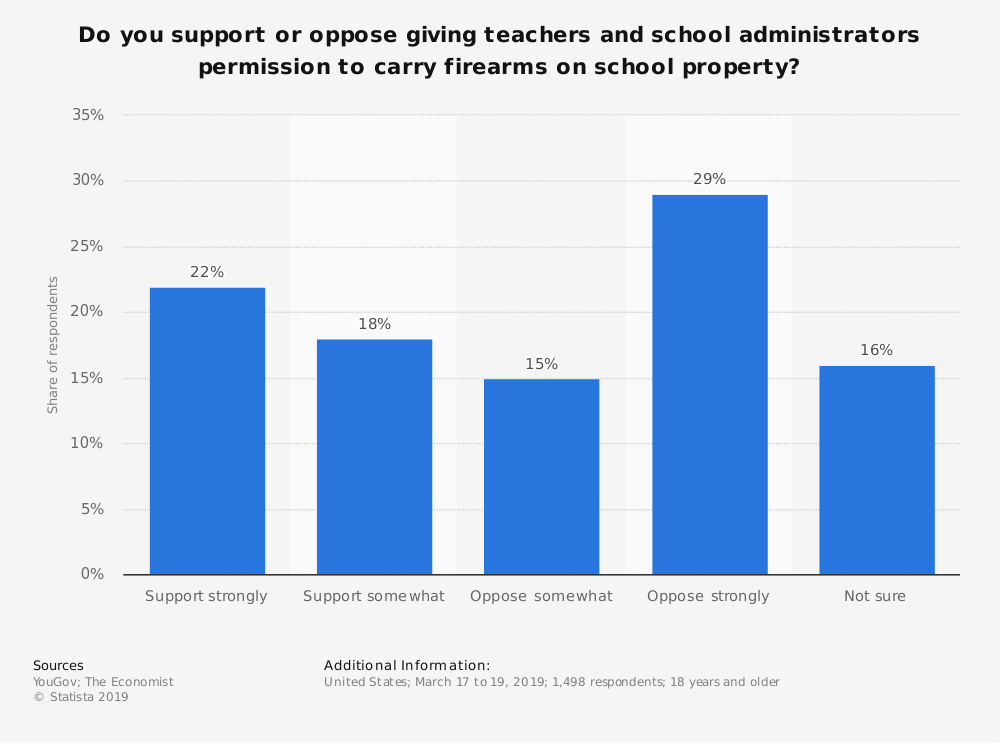 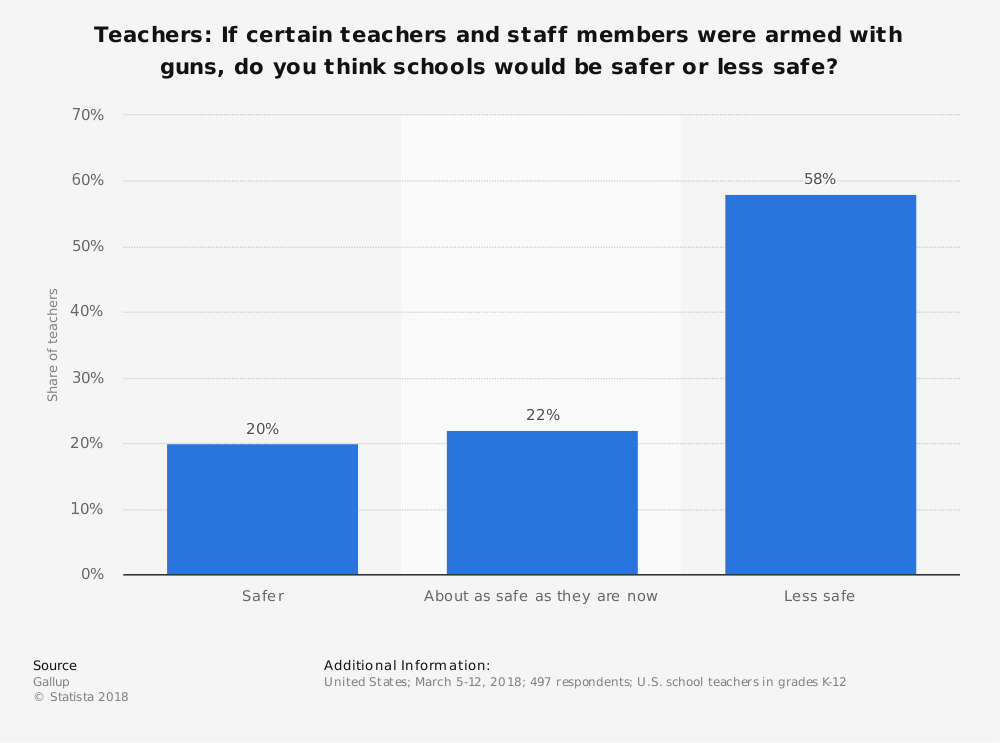 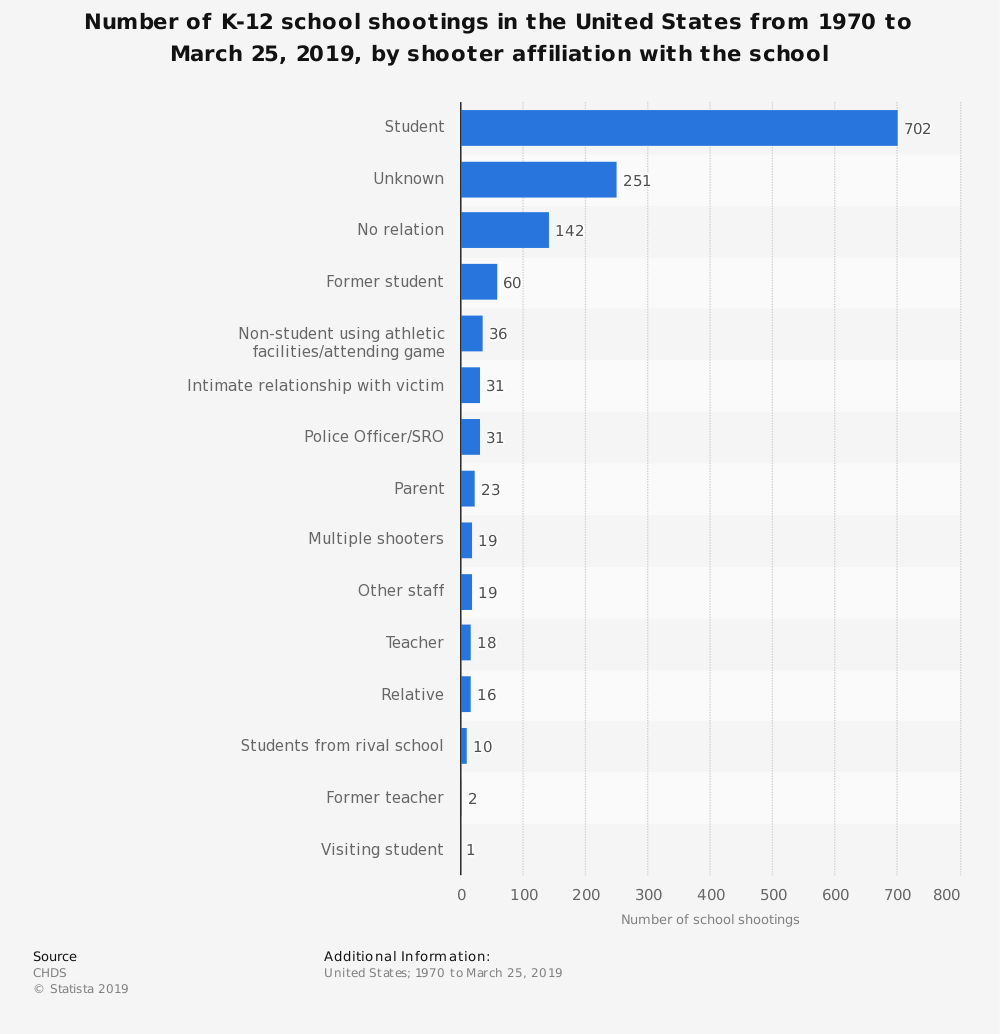